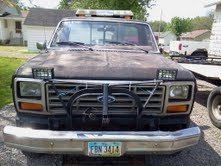 I have a 85 ford f150 for sale. 4.9l auto 4x4 77k has red interior with grey door panels. no carpet. drivers side floor has been patched with sheet metal. has a pioneer CD player. has a Meyer classic snow plow mount with slick stick control and wiring. also a Meyer E-47 pump that was rebuilt 2 years ago.  also has a federal signal street hawk light bar. which has clear lenses and amber filters on rotators. light bar also has take downs, alleys, flashers and control box for each function. tires r in decent shape. gas tank has been moved into the bed. will also include a 15 gallon fuel cell.(if you want to change out tank for cell).  has a bunch of new parts:
blower motor
distributor cap / rotor
second battery (both about 2 yr old)
thermostat and housing
fuel pump
rebuilt carb
head gasket
intake/exhaust manifold gasket
pan gasket
Head work - cleaned, magged, surfaces reground, new valve seals
plug wires