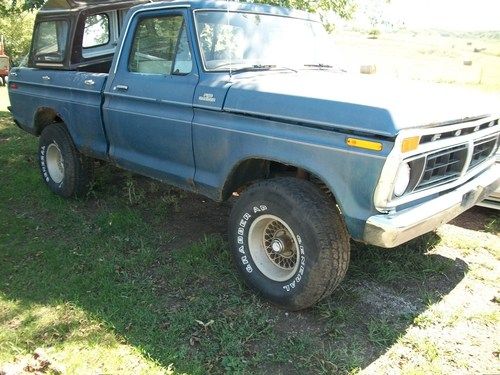 Condition: UsedA vehicle is considered used if it has been registered and issued a title. Used vehicles have had at least one previous owner. The condition of the exterior, interior and engine can vary depending on the vehicle's history. See the seller's listing for full details and description of any imperfections.Seller Notes:"Rust,carb needs kit, brakes don't work right."

1977 Ford F150 Ranger short bed 4x4. 351M starts and runs but carburetor float sticks. Transmission and 4x4 work as should. Brakes are soft and then stick. A/C compressor is gone.Tires are weather cracked. Rust on front edge of hood, cab corners. and seam along back edge of cab floor needs fixed. Box sides are rusty lower panels, tailgate posts need work,and front of box is coming loose from floor. Box floor has some small rust holes along side curves. Rear bumper is laying in bed. Right mirror is missing. Sliding rear window needs new latch.Right wing window handle is broken and theres another window for it laying in the floor. A/C condenser is gone. Sleeper in back is not included in auction. Local pick up only, must be picked up in 30 days. Feel free to ask questions.