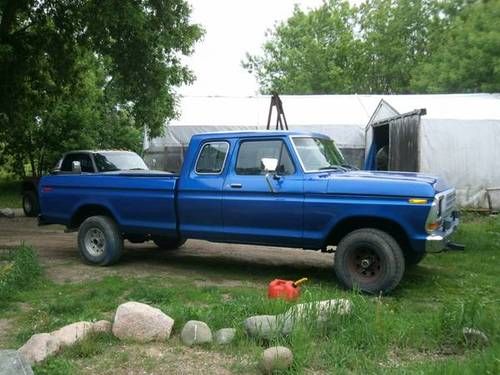 Here we have for your consideration is a 1976 f150 bicentennial  !!!!! the body is in real nice shape.. don,t see very many of these old extended cab trucks around ., it has blue seats silver dash.. has 140,000 miles i have had the truck for a year now put 2500 miles on it 20-40 miles at a time.. the engine runs good transmission shifts good , kick down not hooked up. engine dirty , running a little rich , runs good just uses more fuel than i think it should. has front bench seat rear folding bench , no carpet.  rear seats are not installed at this time , ((because of no carpet.))  floors and cab mounts are all solid. the bed floor should be replaced . bed mounts are good.just the inner ribbed floor section is rusted side's are good..  it has a few nicks in the paint , not perfect but not rusted out junk.  it is at the stage of personalization ad your rims tires and body accessories . 1978 grill sorry..

it has tilt steering, deluxe headliner  , delay wipers,
it does have leakage here and there it is a 37 year old truck..
the valve covers are the only thing i see leaking that drip..
sure i missed something look at the pics and ask questions if you have them..
i would trailer it depending on how far you live.. i am a diesel man myself...
could trade for something cool but would like some cash so i can fix a 79 f250 ..
any questions you can text me at6168906182