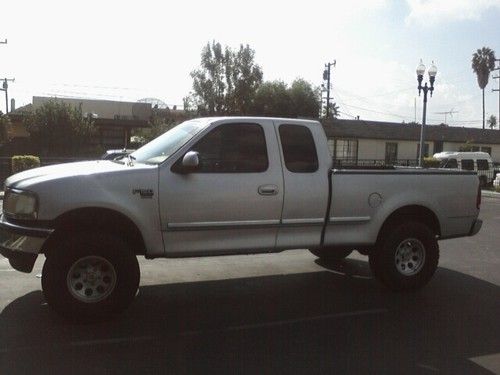 Condition: Used: A vehicle is considered used if it has been registered and issued a title. Used vehicles have had at least one previous owner. The condition of the exterior, interior and engine can vary depending on the vehicle's history. See the seller's listing for full details and description of any imperfections. ...
1998 Ford F150 XLT V8
Extended Cab
Light Gray with Gray Interior
Bench seat and two bucket seats in front with center console
Monster tires with off road rims
Lift kit and Suspension
Runs well and reliable, Strong Engine
Loud exhaust
New Radio/CD player with iPod connection on face/removable face of radio
New Speakers
Full floor liners (black), front and back
Upholstery is in Fair/Good condition
Dash cover included, Dash is also in good condition
Tint Back window and four side windows, with tint bar at the top of the windshield
Brand New Battery, purchased less than 6 months ago from Auto Zone
Power Windows
A/C and Heater work extremely well
Alarm installed, but no keyless entry
3-door (2 doors on the right)
Passed the smog test during last years summer
Had a tune up last July
Back window was purchased new in July 2012 and has the center sliding window.
Damage/Repairs needed:
Scratches around passenger side rear fender
Missing passenger side mirror, just the glass
ceiling material was re-glued due to sagging and it started to sag slightly recently on the edge closet to the windshield, there is also a 1.5" hole in the liner
I have been shifting the car into neutral before I start it, because if I start it in park it turns off when I shift into drive but other than that, the gears have not given me any trouble
Engine light is staying on, was told it could be the spark plugs, which needs to be replaced at the Dealership
Front bumper has a pole-shaped dent, but no damage to the engine
Time to get suspension/alignment checked.
fuse needs to be replaced for the rear brake lights.
Driver side window motor should probably be replace because it is very slow.
Brakes should be replaced soon
Has power locks but the motor needs to be replaced because it doesn't work every time to unlock but it does lock the doors.
This truck is great and has a lot of power. It needs only minor repairs but to be honest, I am out of work and cannot afford the repairs and I would rather sell it to someone can care for it then run it to the ground.
I am sure you will enjoy driving this truck as much as I have.
I am relisting because the auction winner did not pay. Please only honest  and serious buyers.