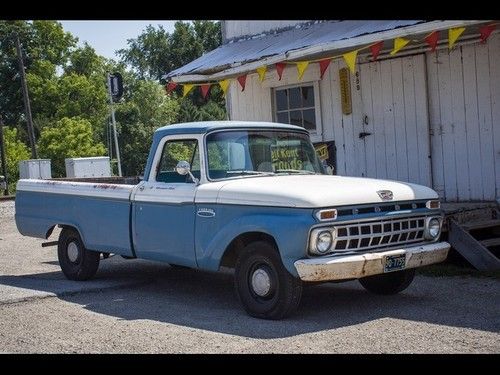 1965 Ford F-100 Pickup. This truck has spent it's entire life up to the past three years in Oregon. It has it share of dents, scratches, sun fading, and patina, but almost no rot or real rust. The whole undercarriage is extremely solid, I could not find any soft spots or rust anywhere. The body mounts are great and the floors are as well. Even the cab corners show no signs of actual rust. The truck runs and drives great, and could be daily driven if you do not mind the manual steering and brakes. Newer tires on all four sides as well. Inline six with a three speed on the tree. I have driven the truck quite a bit and would not hesitate to drive it anywhere. Goes down the highway with no problems at 80 mph. Great opportunity to buy a very presentable and solid classic truck. Perfect candidate to restore, rat rod, or simply drive it as is! Give me a call anytime, (419) 309 2107. Thanks, good luck bidding!