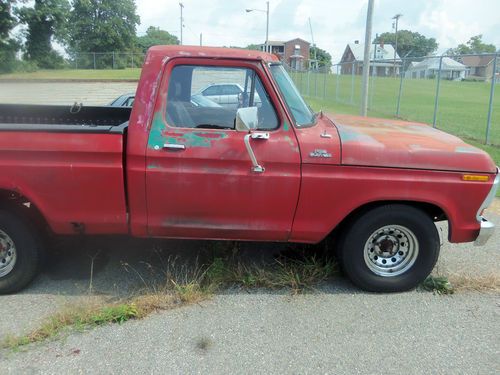 Condition: UsedA vehicle is considered used if it has been registered and issued a title. Used vehicles have had at least one previous owner. The condition of the exterior, interior and engine can vary depending on the vehicle's history. See the seller's listing for full details and description of any imperfections.Seller Notes:"The truck has some wear, but it is a 1978! It has 302 cleveland block motor in it! Still fires up and runs great! Needs tires and alittle body work!"

1978 Ford F-100, still in good shape! 302 cleveland block engine, the motor alone is worth $1,000 dollars! Custom black door panels and ceiling texture! Needs a paint job! Chrome wheels, but need some tires! Tires are starting to be wore out! Fires up with no problems! call me if you have any questions! Roger 276-224-5599