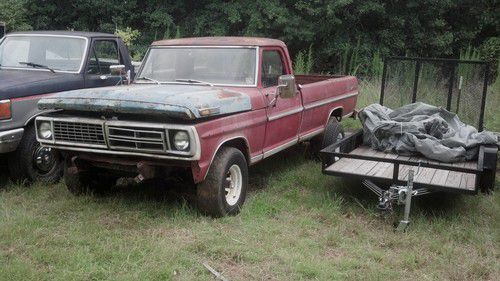 1972 F100 4X4 longbed. 360 big block with 4 speed manual transmission. I had originally bought this truck to restore but have realized I don't have the time. I bought this truck in the same condition it is in now and cannot tell you much more about the truck as I have never driven it.  These trucks are getting hard to find especially a 4X4. Truck is in rough condition and has rust but still runs when primed. This is a project truck for someone wanting to restore that hard to find automobile. You will need a trailer to move the truck. The mileage is not accurate as I am sure it has turned over and the odometer may and may not be correct.   I have the truck for sale locally and reserve the right to cancel the auction at anytime.  Truck is sold as is and where is.  Truck must be paid for at auction end but I will give winning bidder up to 30 days to pick up at no charge.  Please call me with any questions 706-536-7403.