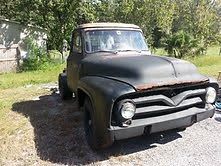 Up for action is a 54 ford truck the frame and motor are not original it did run a few months ago so I can only assume it still dose, If you have any questions give me a call 4074869262 thank you

This vehicle has no title comes with bill of sale