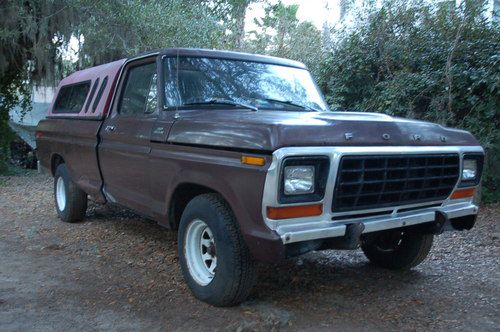 for sale is my 1979 ford f-100. now to answer the #1 question of the day...why am I starting it for so little?... The truck was purchased for work, I am a carpenter, and my former partner, whom the truck was purchased for, has moved back out West, to help his mother who is rapidly losing her vision. Before leaving he (who claimed to be a good mechanic) removed the engine, and it was rebuilt. After words he started putting the engine compartment back together, but is still apart... radiator hoses, exhaust system,  power steering pump, and probably more. I say probably more, because once again I am a carpenter, and not a mechanic. Before he completed the work on the truck, the plan was to finish the work on the truck, and then for him to leave. I was going to give the truck to him, but we had a falling out, and he left our partnership under bad terms, and the truck incomplete. Now after sitting around for a little over 6 months, I do not really know what to do with it. I have already spent more money on it than I had planned, and refuse to spend another dime on it! I have a great truck, and every time I look at this one, it just brings up bad memories. I can only compare this feeling, to having an ex-girlfriend as a roommate! I know very little about these trucks, only what I have been told. I do know these things,...The 351 is what is known as a modified, manual brakes(no power assist),  but has front disc brakes. Was told the frame is in good shape...apparently when this model has frame issues the cab and the bed meet at the top of the bed. As you can see from the side picture, this truck has no apparent issues here. Was also told that the body is very "clean" (although in need of new paint). The bed has one place on the passenger side forward of back tire, about the size of a car tag. The tailgate has a place about the size of a soda can, on the lower left side. The truck has always been in the South, and has very little surface rust, which I find surprising, due to the paint condition. Extras...lots of extras!! In the back of the truck there are two doors left and right, an extra dash panel, two drive shafts, a radiator (the one in the engine compartment is in place), four wheels (3 of which with tires, of unknown condition). There are exhaust parts, and the front bumper, but I am pretty sure they are the ones that came off, thus not making them extra, just there. the cap is included, as I have no obvious use for it. If you have any questions, do not hesitate to ask, I will answer to the best of my ability... My feedback score is a perfect 100%, and I do not want to change that!! If the truck were actually in driving condition, I would be starting the bid at a much higher price, so my loss, your gain. I am a big fan of old cars, and hate to see something just sit around and go downhill, so I hope someone who is mechanically inclined will give it a good new home! Thanks for checking out my auction!