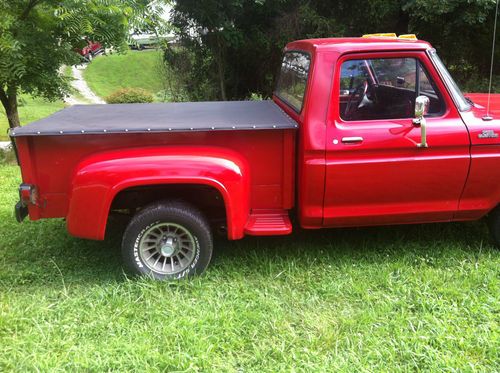 Condition: UsedA vehicle is considered used if it has been registered and issued a title. Used vehicles have had at least one previous owner. The condition of the exterior, interior and engine can vary depending on the vehicle's history. See the seller's listing for full details and description of any imperfections.Seller Notes:"great truck few small scraps and place"

truck has 87,915 miles miles the motor is a 351 .060 with a elb 520 cam kit elb intake and carb also a hei style dis screw in studs so u can adj the vales sure i missed few things like headers and a rebuilt c6 truck has about 200 miles on motor build but has been sitting in grage lot it life was a airforce basce truck  has full spool in rear with 4:30  gears new wood in bed also new black carpet any question just ask was factory 302 truck