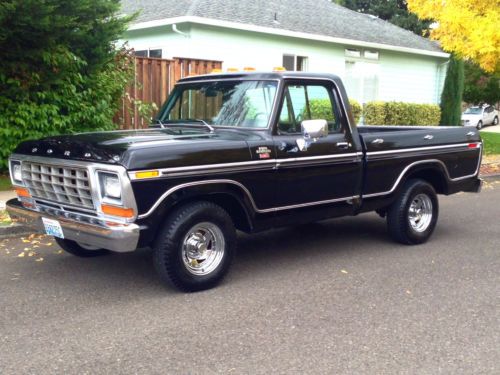 Condition: Used: A vehicle is considered used if it has been registered and issued a title. Used vehicles have had at least one previous owner. The condition of the exterior, interior and engine can vary depending on the vehicle's history. See the seller's listing for full details and description of any imperfections. ...
WORLD WIDE AUCTION!
1978 Ford F-100 Lariat 2WD Shortwide
84K miles not sure if the miles are original but it looks like it
351cu V8 automatic
Ice cold A/C
Heater defrost
AM/FM Stereo W/ CD player
Rear sliding window
Cruise control
Fires right up
Spray on rhino bed liner
Runs and drives great!
Exterior is in great condition!
Interior is just as nice
Really nice head turner
Takes you back to 1978 when cars and trucks were built by hand
Clean title
Really solid
Good tires
1 Owner
Garaged kept
Adult owned
Call for more info.
(360) 607-1959
I have all rights to end my action early for the right price.
due to washington law cause of a private sale this truck is sold AS/IS (NO WARRANTY)
NOTE: if you have "ZERO" or "NEGATIVE" feedback contact me prior before live auction bid or it will be removed.
Buyer is in charge of shipping or pickup
Payment: i require a $1000 deposit via paypal and remaining balance due via wire transfer or deposit
thanks and happy bidding.
Deposit is non refundable