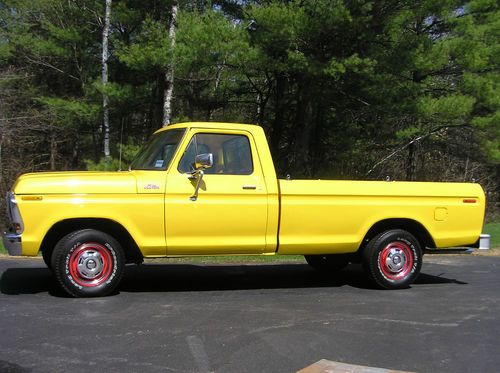 A True Rust-Free Arizona Pickup Truck, No Rust Ever, Never in Snow.....Driven from Arizona with no Problems ,You can't kill a Ford 300 six.....Factory working Air-Conditioning....New Paint inside and out with Bed-Liner to match.. 300 cubic inch six cyclinder ,,,But!!!! ...with Offenhauser 4 Barrel Intake and 500cc Edelbrock Carb....True Dual Exhaust with cast iron split headers...New Clutch and 3 speed on floor..New tires and new rubber all around....Great running daily driver but more fun with the 4 Barrel utilizing that horsepower...Drive anywhere with confidence... Will deliver within a reasonable Distance of New England for expenses,,,,,,  Lots of comments wherever I go, fun to Cruise ins too!!!