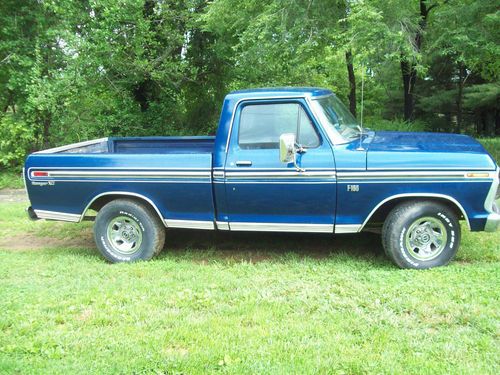 this is a 1974 ford F-100 in very nice condition it has no bondo!  there was only one little spot of rust on the floor board that I have patched when I bought it  there was a F.E. 390 under the hood but I pulled it and dropped in a 1971 429 that was bored 30 over with flat top pistons polyurethane rings headman headers 523 cam and a brand new 750 holly 4barel carb this motor has around 7000 miles on it with a 1987 c6 trans this truck will run fast and loud. the interior needs work and I hate to say is lacking in style but that just leaves you room to make it yours. it still has old 9inch rear end which is almost indestructible I have just put a new gas tank and sending unit in a few months back. This truck is not for kids it is a very hot motor and it will try to brake free!    I am only selling this truck because I lost my job and have no room in the budget to finish her