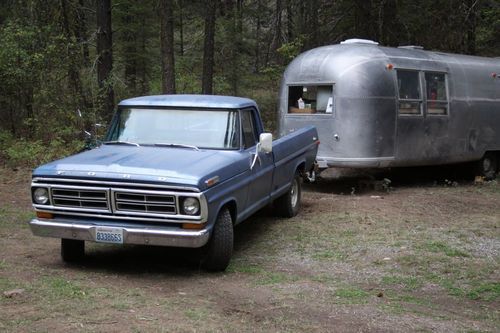 Condition: UsedA vehicle is considered used if it has been registered and issued a title. Used vehicles have had at least one previous owner. The condition of the exterior, interior and engine can vary depending on the vehicle's history. See the seller's listing for full details and description of any imperfections.Seller Notes:"Several small dents in body (see Photos), Bench seat torn/poor shape on driver side (seat cover hides defects), some surface rust"

Thanks for checking out my 1972 F-100.  This truck is a solid truck.  The engine is a 360 V8 that was rebuilt several years ago.  This truck is an automatic.  Mechanically this truck is very strong.    The truck has lots of power and is heaps of fun to drive.  All gauges, lights, wipers, and the radio on the truck work.  The interior is in very good shape with the exception being the seat.  The bucket seat is torn but with the seat cover it is not noticeable.  All windows/seals function and work.   The exterior is in good shape.  The blue paint is (in my opinion) an lovely classic patina.  There are several small dents on the drivers door (see photos) and one small dent on the cab.  There is some surface rust but nothing serious.  The cab corners are in great shape - overall very little rust. There is no tailgate - I have thought about getting one  but decided I did not want to have to paint this truck since I love the patina blue.  Tires and rims are in good condition.  Overall  this is a great truck that will make an amazing restoration or just be a reliable fun classic to use for it real truck purpose.   I have tried to be upfront with any issues with this truck but please keep in mind that this is a 40 year old vehicle.  Thanks for looking at Old Blue.  If you have any questions feel free to send me an email or give me a call at 2085300603.  If you are in the Methow Valley area feel free to stop by and check it out in person.  Thanks