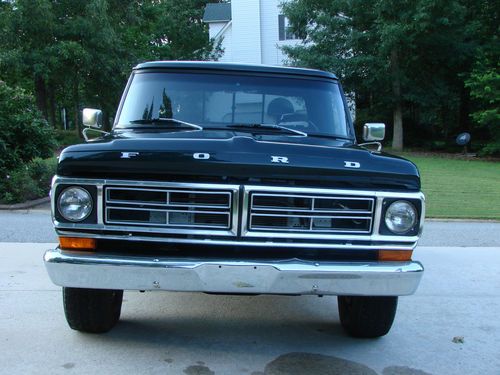 I bought this truck from a older gentleman who said he put well over 10,000 dollars in the truck since he purchased it in 1997 . It has always been garaged kept since he purchased it and rarely driven.  Truck has a rebuilt big block 360 with a recent rebuilt automatic transmission that both run and shift great. Newer brakes , shocks, hoses etc..  Brand new complete ac system that works great and blows nice and cold . Power steering, automatic transmission , later model wheels, linex bed liner, roll in lock bed cover , am /fm radio and more . The paint on the truck looks great and is very straight. It looks black in the pictures but it is really dark green with metallic type flake . The paint is a few years old now ,so it does show some small  blemishes here and there from age. Great solid body with very little rust.  The only real rust is under the battery tray and underside of hood on driver side (very common for these trucks) .  Perfect glass with rear slider installed !  Newer upholstered seat , good aftermarket carpet with original style floor mat. The dash pad was never reinstalled after painting.  The truck does have a exhaust leak which I think is coming from the manifold on the driver side? All the lights work perfectly including brake lights. The gauges do have a mind of their own, they work most of the time then sometimes they do not ( I think it just a loose ground wire or something going to the gauges) . All the chrome is present except for one small piece which is present in the pictures .  Overall the truck is a great driver and in excellent shape for the age. A perfect driver at what will be sold for a great price!!! Yes it is reliable I just drove it  over a 100 miles.  Low reserve so do not miss out on this awesome looking truck !

Please only bid if you plan to buy and ask all questions first.
Its rare to have a title in Georgia because they only require a bill of sale , But I do HAVE a Georgia title for this truck.  The only small problem is that the previous owner signed the back and never turned the title in he just used the bill of sale.
I think there is another blank line under his signature if need be to sign?  If all else fails you will be receive a good Georgia bill of sale , and with that you should be able to obtain a title if your state requires it.