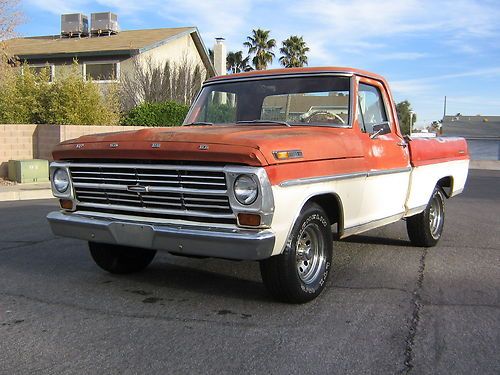 Up for auction is my 68 Ford F-100 Ranger short bed. The truck has a good running 360 V-8 with an automatic transmission and factory air conditioning!  This is a rock solid truck with absolutely no rot with the exception of some light surface rust on the bed and hood. The truck has spent its whole life in the dry Arizona desert. The dash is cracked in pieces and the door pulls were cracked as well. The body is super solid with a couple dents and dings as you can see in the pics. This truck is almost totally complete except for some trim pieces and the rear bumper. Somebody also at some point took the A/C compressor off the truck. This is an awesome original paint two owner short bed that runs great and has the best set of floors I've seen in a long time. I took the worn out carpet out to show how good the floors are. I kept a small piece of the carpet so you can color match it later. This is a great short bed that would be perfect to fully restore or drive it as is right now! The reserve is set low so BID TO WIN!! This truck will be sold as is where is with no warranty implied. I also reserve the right to end this auction early as the truck is for sale locally.