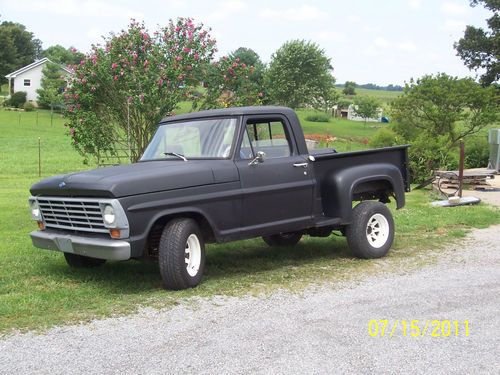 Condition: UsedA vehicle is considered used if it has been registered and issued a title. Used vehicles have had at least one previous owner. The condition of the exterior, interior and engine can vary depending on the vehicle's history. See the seller's listing for full details and description of any imperfections.Seller Notes:"It is a 1967 Ford stepside black in color Has the typical scratches and dings a truck of this age would have... Has a rip in the drivers side seat where you get in and out the oak boards in the back are still in pretty good shape..Doors are good floor is good tires are decent has new rear end, new leaf springs, shocks in rear and brakes....No Reserve The body alone on a 67 stepside in fare condition is worth the starting bid.."

This is a 1967 Ford Stepside showing 49000 miles and the speedometer does work I bought this truck from a real old man that got where he could not shift the gears anymore.... I have it in my shop where it has been for a while but I take it out once a week but I dont drive  it all the time and thats why Im selling it... It needs to go where someone will finish it to show I would say it is about 75% there already but would be great for a fater and son to do and show it... Would also be a great gift for a person just like it is it is drivable runs good... NO RESERVE  (The body alone in fare condition is worth the starting bid price itself )...Thanks Gary