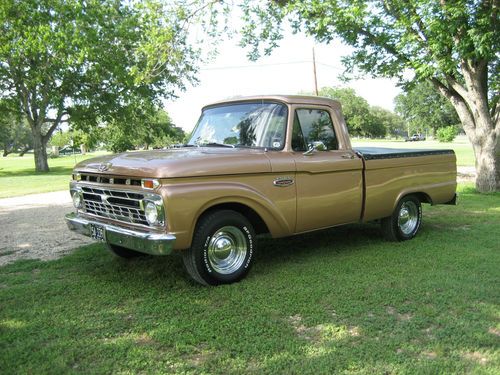 This old Ford truck is a great daily driver.  It has been built for that purpose.  The entire cab is sound deadened and insulated.  the floor is double insulated.  the doors have new tracks with new felt and new locks.  All glass is original and have just been tinted.  The interior was installed May, 2012 with new seat covers, door panels, carpet, kick panels, and headliner.  Carpet is one piece from firewall to just below the rear window.  Custom powder-coated gauge panel with electric oil pressure, water temp, volt meter, fuel level, speedometer, and tachometer.  All gauges are made by Autometer and work as they should.  Turn signal and bright lights indicators also work as they should.  The head unit is a JVC with CD player and MP3 connection on front with removable face plate.  It also picks up HD stations and broadcast in HD.  I just installed 6x9 pioneer speakers in the doors.  Wires are there for rear speakers but not installed yet.

The fuel tank was moved to the bed for more leg room.  The tank is a 15 gallon RCI aluminum tank with a filler door in the tonneau cover.  There is a roll over valve for added safety.  All new fuel lines, (3/8") from tank to carb.  three fuel filters.  300 miles to a tank @ 20mpg.
The color is a stock Ford color.  Vintage Air A/C unit with new compressor, drier with bi-nary switch, lines, and evaporator.  The controls are all electronic, back lit at night.  No vaccum doors or lines to mess up.  It is cold A/C.
Heater works with electric shut-off valve.  Also has defrost and works very well.  new electric wiper system but has not been in the rain yet.  New Speedway stainless steering column with old school, removable 4-spoke steering wheel, and a new turn signal switch.
Chassis:  All the twin i beam bushing and rear shackle bushings are new.  Front alignment is right on, it drives straight, and stops straight.  The brake system is all new including all drums turned, 4 new wheel cylinders and brake shoes, and new rubber lines.  Also replaced all bearings and seals at the same time.  New '68 mustang master cylinder with double resivoir.  Drive shaft is shortened and balanced with new universal joints.  Installed new 18 circuit Hot Wires harness.  No wiring issues!
Drivetrain:  All new 300 ci rebuilt to stock specs by Performance Machine in Georgetown, TX.  New water pump, timing chain, oil pump, cam, lifters, rods, and pistons.  Block was bored .040".  The crankshaft is new with stock specs.  All new hoses, belts, wires, coil, etc. New 2-barrel Holley Carb that has been re-jetted for best economy.  Electric choke works as it should.  Flywheel turned, new pressure plate, clutch disc, and throw out bearing.  The trans is a World-class T5 out of a '93 Mustang Cobra.  probably good to 450 horse just completely rebuilt by Pistoles Transmissions in Austin.  It shifts like new.  At 60 mph the RPM reads 2000 in fifth gear.  The rear end is a bulletproof 9" with 4:11 gears.  No squeaks or rattles.  New emergency brake cables were installed and work great.  The exhaust system is all new aluminized 2.5" all the way.  Really quiet.  New aluminum 4-core radiator keeps the temp to 175 on the road and 200 with the air on at idle!  New 90 amp chrome, one wire alternator which puts out 14 volts at all speeds.   Battery and cables are new.  New 15" chrome wheels with baby moons, with new BFG Radial T-A's bought at Discount Tire with road hazard warranty and tire rotation and balancing.
This has been a three year project.  I have enjoyed showing it and have won several trophies and hundreds of thumbs up!  I feel like it's time to move on to a new project.  I just drove from Austin to Fort Worth with no problems and would not hesitate to drive it to California.  It has never let me down.