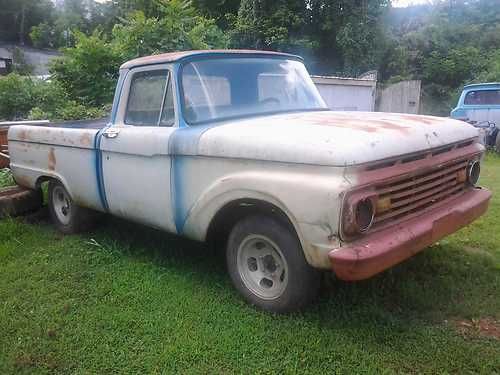 64 FORD TRUCK VERY SOLID AN PRETTY STRIGHT WILL MAKE A VERY NICE TRUCK. THE TWO SLOTS ON THE BACK DONT BELONG TO ME BUT I DO HAVE THE ONES FOR IT THERE IS SLIGHT DIFFERENCE IN THEM. THE TAIL GATE IS OFF A NEWER TRUCK AN IN REALLY BAD SHAPE THE BED HAS RUST IN THE FRONT (LIKE MOST) THE FLOORS ARE IN AWESOME SHAPE WOULD'T TAKE MUCH TO MAKE A SWEET RIDE JUST TO MENY PROJECTS ASK ME AYTHING YOU NEED TO KNOW BEFOR BIDDING IF MORE PICKS ARE NEEDED LMK.THANKS GOD BLESS