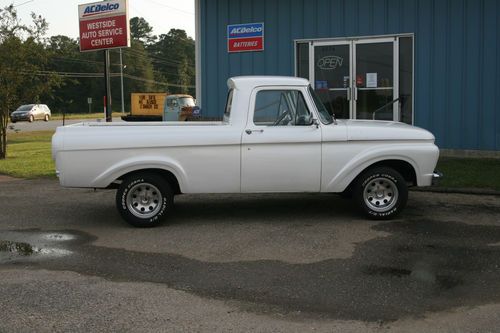 Condition: UsedA vehicle is considered used if it has been registered and issued a title. Used vehicles have had at least one previous owner. The condition of the exterior, interior and engine can vary depending on the vehicle's history. See the seller's listing for full details and description of any imperfections.Seller Notes:"Has been bumped on tailgate by lawnmower ( not bad )"

This truck was restored 10 years ago and kept inside, had new 302 engine installed 5 months ago and still has 2 1/2 years warranty and have paper work, after engine was installed drove truck to georgia and back to alabama, ran great, drove great, shifted great, no noises, no whines, no roars, no noises other than the good sounding exhaust that is not too loud. Truck has new brakes including wheel cylinders, shoes and all drums were turned, and new master cylinder so it stops straight. New tires. The under side of the truck was cleaned again very recent so its very clean. Tailgate got bumped by lawn mower in very small spot as you can see in tailgate picture and headliner is sagging but truck is in very good. It needs an owner that wants to enjoy driving it around.