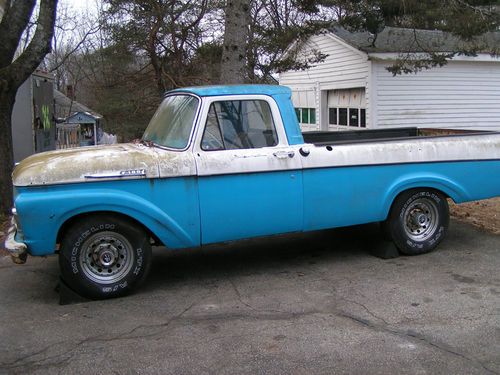 I have a 1961 Ford F100 Unibody project up for sale. If you are looking you probably already know these were made from 1961-1963. This isn't my first Slick F100 rodeo so let me try to tell you everything I can about it and you can ask questions from there.

The important things..
*IT DOES NOT HAVE A TITLE since in Maine anything over 25years old does not get one issued but I can request one from the state of Maine if your state requires it.
*It was created as an F100 (5lug) but the PO in Idaho changed it to an 8lug set up.
*It was on the road in 2006/7 in Idaho, bought off ebay by PO and shipped to Connecticut where it sat for almost 4 years,I bought it and had it shipped to Maine.
*The front clip is off and disassembled so you can see everything, fenders are pretty good, inner fenders are great, core support is new FOMOCO, and it has a tailgate!

Details:
*292 V8 (turns freely but does not fire)Oil pressure is up on gauge, dist turns and fan turns with the key, just no fire
*4sp manual
*rear end is a Chevy/Eaton HO52 8 lug with a bunch of springs
*front end is a solid axle 1955-1959 series 2 chevy (probably from the same as the rear 3/4 chevy)
*has rust on the floorboards, and on the inside cab wall where the wall/kick panel meets the cab mount (see pics)
*had rust at the roof line but I cut that out and welded in sheet metal before the winter came
*sweet chrome grill and chrome headlight buckets
*comes with new ford core support (see pics), new front sill, new inner fender
*comes with lots and lots of parts- 3 bins worth.
*I have already painted the following
*hood latch support bars, hood latch, and catch
*vent doors (air cables both work smooth)
*heater box (heater core was check out by shop near me and repaired)
*new shock towers (if you want to switch back to 5lug you will want these new ones
*mirror, visors, hood springs, and battery tray
*hood spears and emblems
*boiled gas tank and painted

As you can see from the photos it is a project, you will want a new hood and a radiator. I can provide the old ones for measurement, but you will want new. The bed is in really good shape at the front where it meets the back of the cab. The torque boxes are in great shape, no holes in them and no holes at the side of the bed that I can find. It will need floor pans, and work on the tailgate. It will also need work on the roof line to make it right, I did it fast to get them covered for the winter as there were huge holes.

*Other goodies include a set of 1968 Mustang bucket seats and 2 new sets of seat tracks, all you need is the Ranger mounting brackets (available in the after market...I'll tell you where)

Please ask if you have questions, all shipping is to be done by the buyer but I can suggest one that I have used in the past

finally, there are 151 photos on another site where you put "photos in a bucket"
just add an http : // before the link below and remove the spaces
s100.beta.photobucket.com/user/fedorov_rocks/library/1961Unibody