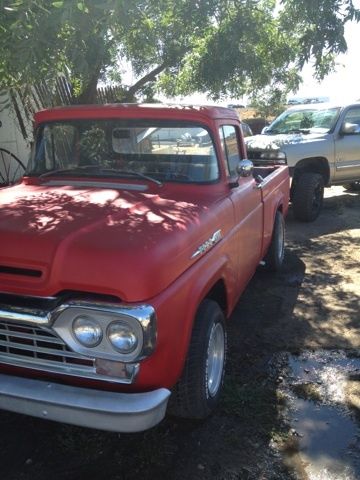 Condition: UsedA vehicle is considered used if it has been registered and issued a title. Used vehicles have had at least one previous owner. The condition of the exterior, interior and engine can vary depending on the vehicle's history. See the seller's listing for full details and description of any imperfections.Seller Notes:"Up for sale is A 1960 Ford F100 with 63,000 original milesThe truck has a 460 Big Block ford with a C6 automatic tranny, 20,000 on the motor.The truck has many different parts upgrades such as msd ignition ,headers, new shocks, bushings, mag aluminum rimsIts pushing 500 hp at the rear wheel, make this truck your new PRO STREET OR DRAG90% done no low ballers will trade with a cash offer on top plus a rat rod or ?? No junk this trucks worth $10,000 low average without the motor and trannycall anytime or email (510)943-8349"

Up for sale is A 1960 Ford F100 with 63,000 original miles
The truck has a 460 Big Block ford with a C6 automatic tranny, 20,000 on the motor.
The truck has many different parts upgrades such as msd ignition ,headers, new shocks, bushings, mag aluminum rims
Its pushing 500 hp at the rear wheel, make this truck your new PRO STREET OR DRAG truck