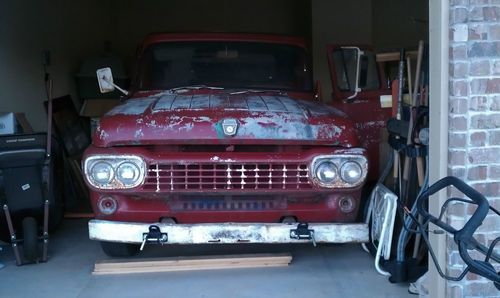 1958 Ford F100 Sport Side for sale.  Truck has not run in over 15 years. Inline 6 cylinder and transmission included.  Truck is complete, just needs someone mechanically inclined.   "3 on the tree" manual transmission.  Frame appears straight, only rust I know of is on the step panels of the cab, included in pictures.  I bought this truck from my father with hopes of it being a project, but just don't have time to work on it.  Bed wood has rotted and is no longer in place, steel support still present. Kids in the neighborhood shot the windows with a BB gun, all windows but the passenger side window.   Buyer to pay all shipping costs.