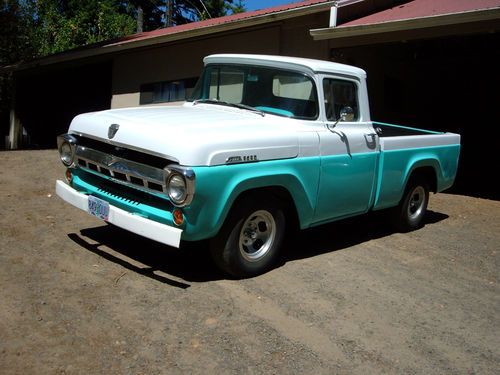 Condition: UsedA vehicle is considered used if it has been registered and issued a title. Used vehicles have had at least one previous owner. The condition of the exterior, interior and engine can vary depending on the vehicle's history. See the seller's listing for full details and description of any imperfections.Seller Notes:"Driver quality finish with flaws in body work and paint, runs and drives, not perfect."

This truck is actually a 1960 model truck with a 57 front clip on it . It has a 223 six cylinder and a truck 4 speed trans. The paint is bright and shiny but the body work and paint has flaws and is not perfect. The truck is very solid with a little rust thru on the rear cab corners that is not visable except  from underside. It runs and drives but does not have current tags , it has electric wipers that work well, the lights , turn signals, gauges, heater , E brake, clutch etc. all work well and the engine has a remanufactured head on it that could use a readjustment as it has a little lifter noise and yes I have checked the oil pressure and it is good.      Feel free to call with any questions at 503 807 5167. This is for sale locally and I reserve the right to end the auction early. Having trouble uploading all the photos so if you need more photos I can e mail them.