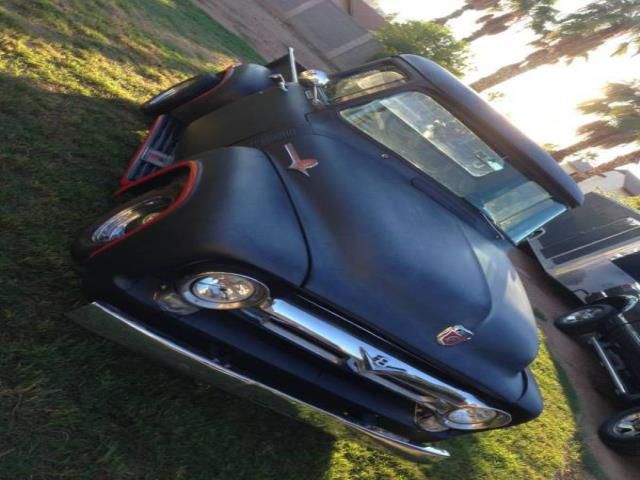 1956 Ford F-100 (F100), half-ton, small window resto-mod, flatblack. This truck has approximate 6300 miles since this restoration about 10years or so ago. -Engine-351 Cleveland, with Edelbrock 4bbl Carburetor, withstainless valve covers, and stainless intake -Transmission- Ford C6 Trans withfresh service (less than 100 miles), and transcooler -Driveline- New customDriveshaft (less than 200 miles) and Ford 9inch rear end - the rear axle is abit wide for this build with the current offset wheel but that could be changedif you wanted to tuck the rear tires in more. -Brakes-Power Front Disc and RearDrum -Suspension- Front Rack and Pinion with IFS from an early 90s Dodge Dakotawith power steering, Rear Stut/leaf spring -Exhaust- Headers with custom dualstainless magnaflow with side exit pencil tips (less than 500 miles on exhaust)-Interior- Moon gauges with a new speedo/speedo cable (approximately 300 milesago), tan cloth bench seat , tan carpet, power windows, painless wiring harness,brand new Optima batter (less than a month old) -Exterior- The robins egg bluewas from the original restoration wasn't in the best shape so it was flatblacked. It does have LED Taillights -The Needs- The truck doesn't havesunvisors , missing the passenger wiper and wiper motor(I may have thatsomewhere), and the passenger taillight stopped working, and has a hairlinecrack in the passenger glass courtesy of the last guy that slammed the door whenhe was looking at it. The bed wood clear is pealing. The hood hinges are tiredbut I was just going to do a tilt hood kit when I got around to that. There is aslight leak on the power steering but it doesn't drip on the floor.