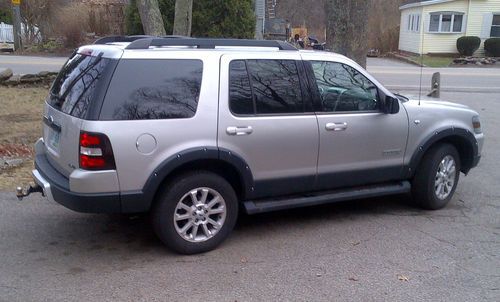 Salvage Vehicle in 2008 - not a Sandy Victim.  I have driven this Explorer for the past 3 years since I bought it in 2010.  It has been the most excellent truck to drive, I travel to the midwest (where I lived previously) regularly and tow often with this Explorer.  It was involved in a fresh water flood which it was salvaged from, but I've never had an issue.  I bought the truck from the gentleman in MA who repaired it and other than regular maintenance, oil changes and detailing, I have not been subject to any other repairs or issues.

My mileage around town is usually 18 and I have gotten up to 21 mpg on my highway trips with a light foot on the gas pedal.  If you like power, the v8 will give it to you, but expect lower gas mileage.  The Explorer drives like a dream, the tires were new the fall of 2011 and have about 8000 miles on them.
Paint and interior is overall Very Good to Excellent, the Explorer does have some small scratches here and there.  Overall the truck is beautiful and I receive compliments all the time.
Features:
5.4L V8 Engine
Running Boards
Roof Rack
Tow Capability up to 5700lb (specs from manual)
4x4
Heated Front Seats
CD/MP3
Sirius (I never ordered)
Automated Sunroof
Leather Interior
3rd Row Seating
Newer Tires
Privacy Glass
$1000 deposit due through paypal immediately upon purchase.  Balance due within 7 days.  Buyer to contact seller within 48 hours after purchase for arranging shipment or pickup.
Thanks for your interest!