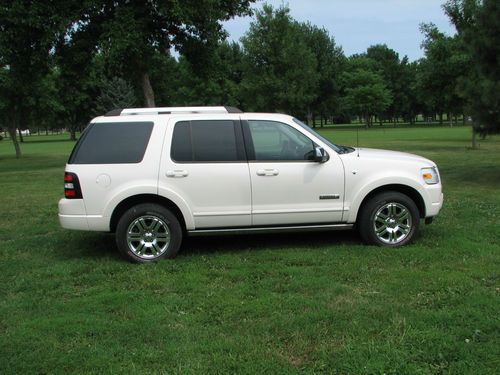 Condition: UsedA vehicle is considered used if it has been registered and issued a title. Used vehicles have had at least one previous owner. The condition of the exterior, interior and engine can vary depending on the vehicle's history. See the seller's listing for full details and description of any imperfections.Seller Notes:"runs and drives great,"

2007 Ford Explorer Limited, 63k miles, V8 auto, auto 4X4, tow package, power sunroof, heated seats, rear air, rear dvd center, 3rd row seats with power folding 3rd seats, power adj pedals, pearl met with black leather, power running boards, radio is blue tooth, runs and drives great.  This has a prior IA salvage title.  I purchased this with front left damage, parts fixed where drivers door and front bumper.  Parts replaced where drivers side fender, inner fender liner, and upper control arm.  No air bags where blown, no warning lights on, no service light, everything works as should.  Only parts needed but does not effect driving are fender molding and end cap for drivers side running board.  Any ?s you may contact Daniel at 712-551-6778. thanks.  The last picture is with the minimal damage that it had.  This was drivable at the time I purchased it.