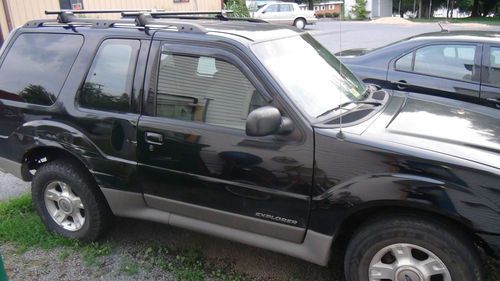 Condition: UsedA vehicle is considered used if it has been registered and issued a title. Used vehicles have had at least one previous owner. The condition of the exterior, interior and engine can vary depending on the vehicle's history. See the seller's listing for full details and description of any imperfections.Seller Notes:"Vechicle turns on no problem, but needs an alternator, muffler / exhaust, minor scraps / dents on left side, & has no driver air bag. I have a new vehicle & don't have time or money to fix the parts that need repaired."

SUV turns on no problem, but needs an alternator. Currently starts off the battery only. The muffler / exhaust may need repair in the near future. Has minor scraps / dents on left side (as shown in the pictures). Has no driver air bag or passenger. The left headlight needs a new bulb. Has 210,00+ miles. Transmission is just over a year old. Has a snowboard rack on the top & a custom fog light grill. Power windows, & locks work perfect & has a nice CD player installed. I have a new vehicle & don't have time or money to fix the parts that need repaired.