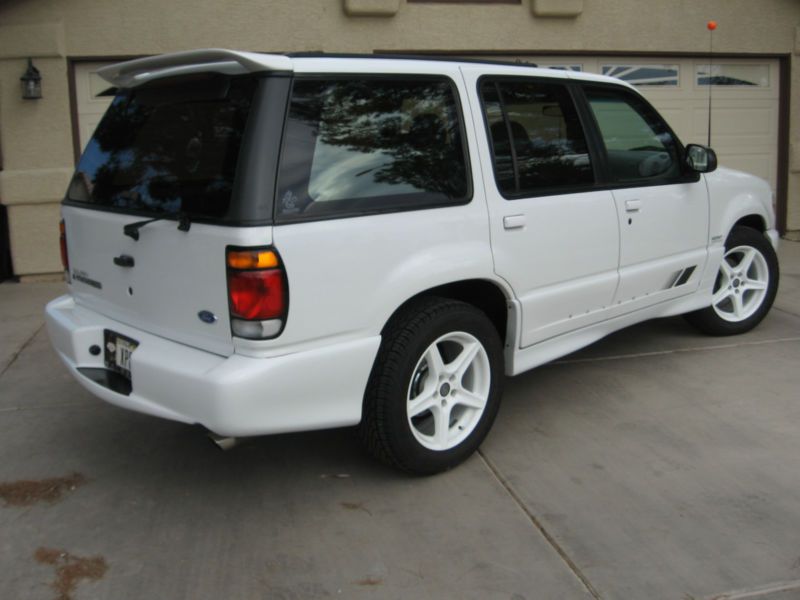 This may be a once in a lifetime opportunity. Most people have never seen, riden in or owned a Saleen Explorer,
this is your chance to knock out all 3 in one shot. As if that is not good enough, you have a chance to see, ride
in and own the very first one ever built! This in the original prototype and first production XP8 Performance
Utility Vehicle. It was built on a 1996 Ford Explorer XLT chassis (registered/titled as a 1996 Explorer) and
utilized as a press vehicle and test mule for the company. This vehicle was featured on the original Saleen
Explorer Sales Brochure, Saleen Performance Parts catelog and numerous periodicals during 1997-1998. This is not
the XP8 in the Motortrend video. 98-0001 and 98-0002 (built on a 1997 chassis) were both featured in a lot of the
early photoshoots and appearances. 98-0002 had a carbon fiber hood, 98-0001 did not. I have a lot of
documentation and paperwork on this vehicle all the way back to the original owner (the daughter of Steve Saleen's
former business partner). Options are the key in figuring the value of these XP8's. This has all the options that
were available at the time (the carbon fiber hood, Alcon brakes and Saleen pedals were not available yet)
Drivetrain:
5.0L motor with Powerdyne supercharger, 4 speed automatic transmission, 3.73 limited slip rear axle and Borla
exhaust.
Exterior:
Crystal White paint, XP8 aerodynamic body kit (Front fascia, side skirts, rear bumper and rear wing) and carbon
fiber mirrors
Interior:
Medium Graphite interior, Recaro Trend front and rear seats, Saleen instrumentation, carbon fiber accents (dash,
rear console, steering wheel) and CoCo floor mats
Other:
Racecraft Suspension and Speedline magnesium wheels with Falken Ziex 255-55-18 tires (they have about 1500 miles on
them)
I have owned 4 of these over the years. They are all special for different reasons. The XP8 specific parts are
made of unobtanium. In most cases the only place to get one is from another XP8. There are several parts that
are specific to this vehicle. It is one of two with these front and rear bumper (notice no gills) covers and the
carbon fiber rear console. There is also a set of one, maybe two off carbon fiber rear diffuser covers that go
with the vehicle but are not currently on the vehicle. They were damaged years ago. This is one special truck and
holds a special place in Saleen history. Imagine if you had the chance to buy the first Saleen Mustang.
As can be expected of a 19 year old vehicle that has over 100,000 miles and 4 owners, there are some items that you
may want to know about. I tried to get a picture of the ones that could be photographed. There is a scratch on
the drivers door, a chip in the paint just above the rear license plate, multiple scuffs on the front bumper, some
of the paint has flaked off between the hood and the windshield and just above the windshield, the transmission
leaks and is starting to slip under heavy acceleration, the check gages light is on as soon as it warms up but I
have never had any problems with any of the gauges, the fuel reset light is on at idle when it is in park (I
believe this is due to the 255 lph Walbro pump in the tank) and the check engine light does not work. I know it is
not on because I have always been able to smog it. Maybe the bulb is out or it was disconnected at some point.
I have done my best to describe this truck to the best of my ability.