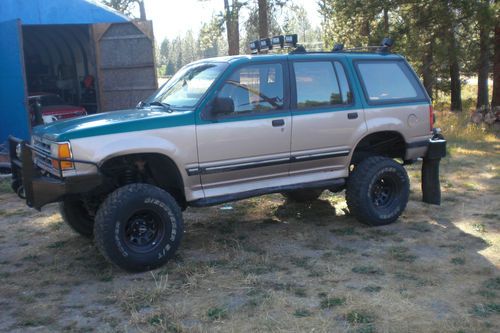 Condition: UsedA vehicle is considered used if it has been registered and issued a title. Used vehicles have had at least one previous owner. The condition of the exterior, interior and engine can vary depending on the vehicle's history. See the seller's listing for full details and description of any imperfections.Seller Notes:"This is a 1994 Ford Explorer, 4.3 liter automatic. It has a 6 inch lift kit, custom steel bumpers, Kenwood stereo, 33" tires, and custom wheels. Interior is in good condition. 4 wheel drive, works good.The bad parts, no overdrive, passenger side damage."

This is a 1994 Ford Explorer, low mileage, used by college student. Custom stereo system installed and working. The 6 inch lift kit was professionally installed. The bumpers, front and rear, were custom made for truck. There is slight damage on passenger side, but door still operates normally. The overdrive does not work, but does not affect performance of vehicle 4 wheel drive works great, great for off-roading or highway driving. Replaced front end axle within the last 3 years. Well taken care of.