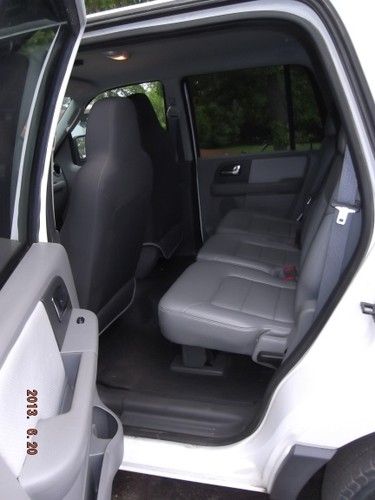 This is a One Owner vehicle, was owned by Ward County, North Dakota - the County that Minot resides in. I am not sure; but I think it may have been some sort of police vehicle. Shouldn't have been Highway Patrol; as title does not say North Dakota State; but rather Ward County.

The County, same as State; has a very comprehensive maintenance program & these vehicles are all maintained & serviced, tuned etc. on a regular, rigid schedule. The sticker on the windshield says it has another 1100 or 1200 miles to go before oil change is due.

The rear seat appears to be leather; the front seats are cloth. It has black rubber mats. As far as I can tell, everything works. I have tried all the power windows, locks, tilt wheel, radio, cruise control, 4 wheel drive, heater, air conditioner etc; & have found nothing yet that doesn't function proper. The only damage I  can see is the crack / damage to the grey plastic on Right Hand End of Rear Bumper, a small crease in right rear door & worst part is the paint bubbling & coming loose on the tail gate; mostly around the handle above the license.

My Sister owns a company, and one of her vehicles, a 2002 Ford Explorer, was totalled on icy roads this spring. She needed another vehicle before this happened; so I went to the auction & purchased 3 vehicles, as I did not know for sure what she wanted. She opted to take a Chevrolet Suburban & a Ford Explorer that I got at same auction; but did not have the funds for all 3 so I have this left; & have no use for it.

When I bought it; it didn't run quite right; had very little power etc. so I replaced a plugged up Catalytic Converter on the LH side; the RH side checked clear & good. I also installed all 8 new spark plugs, & checked things like belts, hoses, air filter etc; everything was good. Spark plugs were not wore very bad either; they would have gone a long time yet but being I had them out I just replaced them. Have run computer analysis since driving it some after repairs; no codes are coming  up & it seems to start & run fine now.

The vehicle does have a clear & open title, waiting for a new owner.

I can send more photos or answer any questions. This is priced way below book; as I bought it right & just need to move it; & get my funds back.

I also collect cars no one else wants, such as Hudson, Kaiser, Studebaker, Jeep, AMC, Packard, etc. & have a Lot of Jeeps & parts, if anyone would like to do some trading. I am also going to the State of Ohio the end of July with an empty trailer, to get an AMC Gremlin I bought in case anyone needs it or something else hauled East.

Bid with confidence on this, I buy a lot of cars & know there are a LOT of liars out there; I have been "Had" by several Ebayers on cars, so I know what it feels like. I do not operate that way. I also got a couple AMC's from San Diego in Jan 2012 that were Excellent, much better than expected; but also got a 49 Hudson from Pa that the guy blatently lied about on just about everything - & he is even a collector car jockey that belongs to AACA!!

I also have this listed for sale locally; so if sells locally I will have to figure out how to end the auction sooner. Thanks for looking!

This is also a Ford EXPEDITION, NOT an Explorer. There appears to be an area in Ebay that keeps saying Explorer; not sure how or where it got it from & it won't let me into that feild to change it.