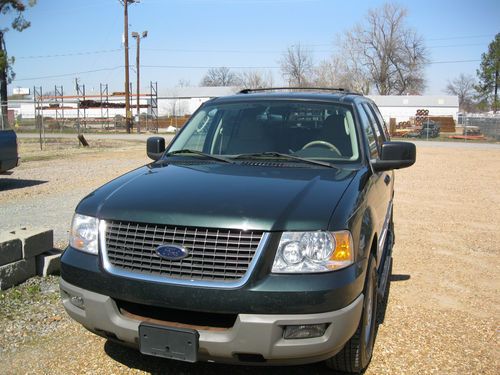 2003 Ford Expedition one owner,non smoker,always garage kept and in excellent condition for a vehicle of this age.Has never been in any kind of accident, has had no paint  work of any kind, serviced by the same garage since out of warranty everythinmg works as it should.The bottom line is the kids are driving and we don't have to take them to school or practice anymore. The pictures don't do this vehicle justice it could use a good buffing and wax but it runs and drives as good as it did when new. Feel free to contact me with any questions thru E-Bay. $1000.00 deposit due at auction end and balance within seven days. I will not be responsible for shipping but will be glad to help you with arrangments or will meet you at any time for pick up.Please do not bid if you don't intend to buy.