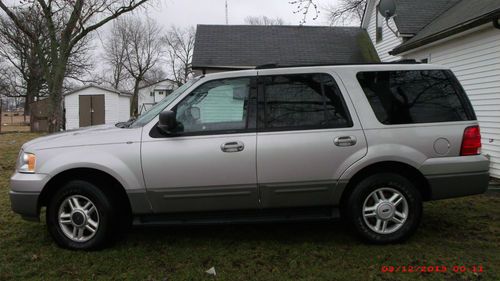 2003 Ford Expedition XLT 4x4 Sport Trim package. This truck is silver with extra clear coat, interior charcoal gray leather, moon roof, 3rd row, seats 8, tow package, 6 CD changer.  New tires 8 mo. ago.  Serviced regularly (have reciepts) and comes with clean bill of health from my mechanic, but will need new brakes before too long.  New fuel pump and brake booster.  This truck is in most excellent driving and running condition.  Wouldn't hesitate to drive across the country.  There are a couple of small scuffs on plastic in back from shoes rubbing against it, nothing bad though.  I will have 2 teens driving this summer so I am downsizing.  Bought 18 mo. ago w/clear title, been great, too much vehicle now.  I am second owner.  Please email or call 765/676-6247 with any questions.  As is, no warranty.  Requiring a $500.00 deposit through PayPal within 48 hrs. after close of auction. This is for sale locally, so I reserve the right to end auction early if it sells.  Thank you.