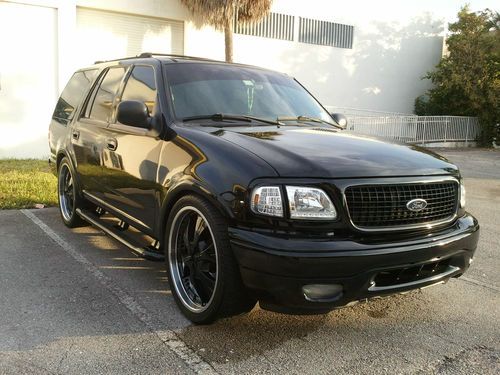 Condition: Used: A vehicle is considered used if it has been registered and issued a title. Used vehicles have had at least one previous owner. The condition of the exterior, interior and engine can vary depending on the vehicle's history. See the seller's listing for full details and description of any imperfections. ...
Details:
2000 Ford Expedition XLT
166,500 miles
V8 5.4L Triton Motor
Engine and transmission run strong
Ice cold dual (front/rear) A/C
Leather seats
Power everything
Add ons:
Clifford Alarm (not 100% working) but the remote start does work
24" Cabo rims with good tire life (70%)
Kenwood indash 7" TV/DVD/CD player
Two 12" Rockford Fosgate HX2 subwoofers (1000 watts RMS) powered by a Soundstorm 4000 watt power amplifier
New Audiopipe mids/highs powered by Soundstorm 2000 watt 4-channel amplifier
Limo tint
HID head lights
Extras included:
Original rims/tires
3rd row seat
Disclaimer:
Shamu (her nick name)  is 13 years old so it she not perfect but has never been in an accident.
I reversed into a car so the rear bumper right side has slight damage.
I have the title clean and clear in hand and and selling locally so I reserve the right to cancel auction.
Sold in "As-Is" condition with no warranty
Call/text Marcel at (305)761-7616.