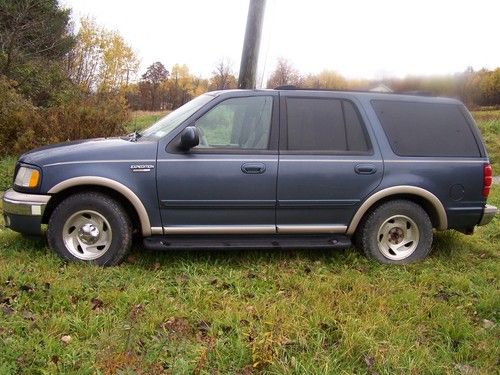 THIS CAR RUNS GOOD NEEDS BACK BRAKES AND A CATALYTIC CONVERTER. HAD FRONT BRAKES REPLACED JANUARY AND A COMPLETE TUNE-UP. STARTS UP IN A FLASH IN BELOW ZERO TEMPERATURES. THE HEATER AND AIR CONDITION DONT WORK RIGHT. IT STARTS TO WORK THEN STOPS. NOT SURE WHAT THE PROBLEM IS. I DON'T HAVE THE MONEY TO PUT IN IT. A MECHANIC TOLD ME COULD BE THE FUSES BUT WOULD COST ALOT TO CHECK IT OUT AND THEN IT MAY NOT BE. I HAVEN'T FOUND AN HONEST MECHANIC YET. IM SURE IF YOU OR SOMEONE KNOWS ABOUT CARS CAN FIX IT. THIS CAR HAS LOTS OF ROOM FOR A BIG FAMILY AND THE SEATS COME OUT FOR EXTRA CARGO SPACE. ALL THE POWER WINDOWS WORK GOOD AND THE TIRES ARE GOOD. RUST ON THE DOOR AS SEEN IN PHOTO. HEATED SEATS WORK GOOD. IF YOU LIKE TO COME SEE IT EMAIL ME TO SET UP A TIME.