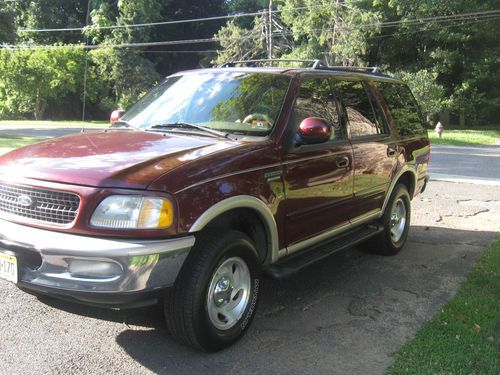 I'VE OWNED THIS VEHICLE SINCE 2002 AND GOT IT OFF LEASE FROM FORD MOTOR CREDIT.
THE TRUCK WAS DEALER MAINTAINED FOR MANY YEARS AND THEN EXTREMELY WELL TAKEN CARE OF AFTER THAT.
IN THE LAST TWO YEARS ALONE THE BATTERY,ALT. REAR SUSPENSION,WATER PUMP,ALL POWER PACKS,FUEL INJECTORS HAVE BEEN REPLACED.
HAVE ALL SERVICE RECORDS FORM 2002 ON.
THE VEHICLE NEEDS NOTHING.
JUST HAD A BRAND NEW MATCHED SET OF TOP OF THE LINE MICHELIN TIRES PUT ON.
WAY TOO MUCH TO LIST WHAT HAS BEEN REPLACED OR UPGRADED ON THIS TRUCK.
TRUCK IS STILL USED DAILY AND HAS TOP COLLISION INS AND IS FULLY REGISTERED.
NJ STATE INSPECTED AND IS GOOD TILL 2015.
THE VEHICLE WAS NEVER IN AN ACCIDENT AND HAS ALL THE EDDIE BAURER AVAILABLE OPTIONS FOR THAT YEAR,LEATHER,TOWING PACKAGE,THIRD ROW SEATS,MOONROOF,CD PLAYER,FORD MACH STEREO SYSTEM-U NAME IT.
TRUCK CAN BE DRIVEN OUT CROSS COUNTRY......AND YES THE A/C IS COLD-THAT WAS SERVICED LAST YEAR.
U CAN CALL ME AT 732-673-7030 TO TEST DRIVE THE VEHICLE OR CHECK IT OUT.
THANKS,
Check out my other items!
Be sure to add me to your favorites list