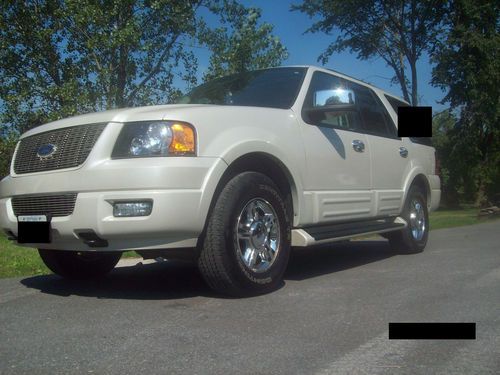 I am selling a 2006 Limited Edition Ford Expedition. Only Lady driven, second owner! This truck features a pearl white exterior and a cashmere accented interior, but this truck is not just for looks! This Expedition features a 5.4l V8 Triton, a very powerful engine, added to the 4x4, it will pull anything no problem! Comes with tow package! It'll get the job done, and you'll look good doing it! Also has Chrome roof rack! The feature of three side airbags give this vehicle a very safe feeling! Also suitable for long road trips this vehicle comes equipped with a DVD player, and dual controls for the media system, as well as a 6 passenger capacity (+ Driver = 7)! Driver and Passenger seats are equipped with the heated and air conditioned options! Remote for unlocking and locking! This Expedition also features a sun roof, park assist, and lots of storage place! Regular Maintenance has always been done! Routine oil changes, Tune up done not too long ago!