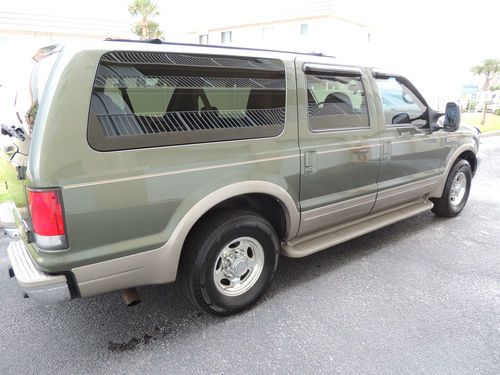 Condition: UsedA vehicle is considered used if it has been registered and issued a title. Used vehicles have had at least one previous owner. The condition of the exterior, interior and engine can vary depending on the vehicle's history. See the seller's listing for full details and description of any imperfections.Seller Notes:"Very lightly used with one small dent in rear door,paint peeled from rearview mirror stalk and VERY few minor scratches."

I have for sale my Ford Excursion 7.3L Powerstroke Diesel which is one of, if not the best, car that I have ever owned.

She is in excellent condition and runs faultlessly,I average about 14.7 MPG and long runs are almost a joy.
She burbles along at less than 2000rpm doing 70mph and can easily accomodate 8 adults.
All systems function as they should and the car  has received very regular servicing.
It is our second car and was bought 10 years ago to tow our boat, however we then decided to dry store the boat so the car only actually towed our boat about 6 times.
I constantly get asked if I want to sell and I am only selling now as my health has deteriorated and my wife is frightened to drive the Excursion as our garage space is very tight.
Good luck bidding!!
.