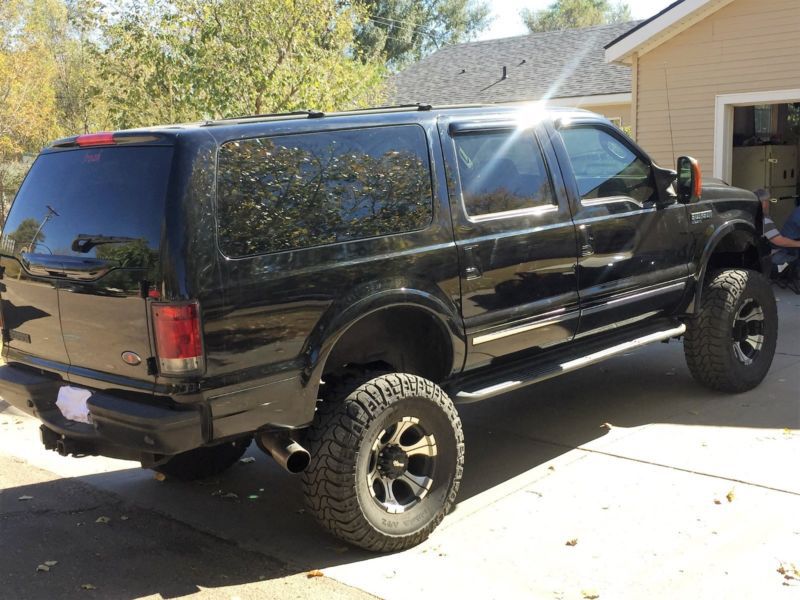 If you have more questions or want more details please email : romaraaltringer@ukso.com .

2005 Ford Excursion Limited. This is a nice vehicle for a family needing to keep their sanity because the kids
want to touch each other and drive the parents up the wall. I have receipts for all the work I have done. This is
a 12 year old vehicle and is in great condition but not show condition yet.1.Bulletproofed by Norwood Diesel in Oklahoma (bulletproof.com certified shop)
2.New Garrett Turbo w/ billet compressor and 360 thrust (nothing wrong with old one)
3.New HPOP w/upgraded IPR screen
4. New Blue Spring Upgrade
5. New ADT Oil cooler
6. New Fan clutch
7.New Derale performance tranny cooling pan ( very much worth the money)
8.Front sway bar new bushings
9. New Dual Bilstein 5100 on front and single Bilstein on rear
10. New Front Axle seals
11. All new brakes and calipers all the way around
12. All new diesel injectors
13.New tint on windows
14. Tires are at 70-75% 37-13.5-18 on Dick cepek rims
15. New interstate batteries
16. New Ford replacement drive shaft
17. New altenator
18. New Ball joints on both sides
19. Ziebart lining underneath
20. Paintless Dent removal done
21. New 2008 Superduty tow mirrors (just installed)
22. New 4.56 Yukon gears in front and back
23. Front and Rear bumpers are Linex
24. New AFE air filter
25. Sinister Coolant filter
26. All new fluids.
27. SCT Livewire programmer