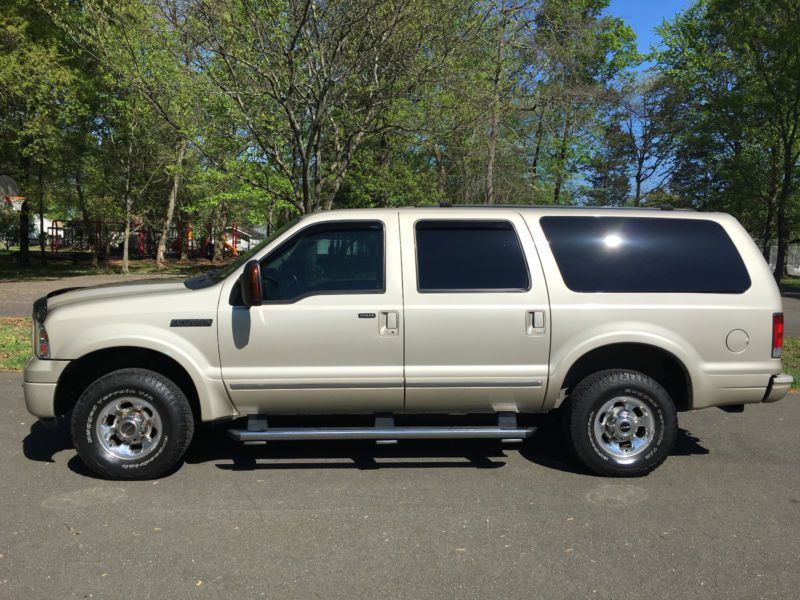 For more pictures email at: cristiecjjoto@sheffunitedfans.com .

Up for sale is an exceptionally clean diesel Excursion. I am the second owner. The 6.0 diesel has had all
"bulletproofing" and reliability mods completed using the correct/best parts. I have receipts for everything to
prove it. All work was done by a Ford diesel technician. This is not the typical 200k mile truck you see online.
I've used full synthetic Mobil 1 or Rotella T6 every 5k since purchasing. The front buckets and console were
replaced with a fully loaded bench/jump seat setup from a Lariat F250. If you've ever tried to find a decent jump
seat for these trucks, you know how rare they are. I have both a leather bench and leather captains for the 2nd row
that will included in the asking price. The flooring has been replaced with tan vinyl flooring from Auto Custom
Carpets. The factory carpet will be included.
Below is a listing of the work that's been done:
2003 10-vane turbo, rebuilt with 360 bearings and billet unison ring from KC Turbos, and billet wicked wheel 2.
10000 miles since rebuild using the upgraded Ford drain tube and correct 2003 pedestal (hard to find!) This turbo
sounds amazing!
ARP head studs with Ford gaskets
XDP EGR delete. EGR valve is in place- no trouble codes or CEL
Blue spring fuel pressure upgrade
New OEM Ford oil cooler
XDP coolant filter kit
Full 4" Turbo-back exhaust, AFE, T-304 Stainless. Stock cat available
S&B CAI with new dry filter and reusable pre-filter wrap
Upgraded metal CAC tube - OEM Ford
New Ford ball joints 1000 miles ago
Newer Ford batteries, still under warranty
Edge CS monitor w EAS cable system and EGT probe installed in driver's exhaust manifold
Innovative Diesel tunes using SCT handheld tuner (Street, Extreme Street, and Tow)
Mag Hytec high capacity covers on both differentials and transmission. Differentials serviced with Mobil 1, Trans
with Motorcraft Mercon SP fluid
Roadmaster active suspension helper springs on rear
Upgraded DC power alternator with heavy duty charge cables from ficmrepair.com
New FICM power supply - Rock solid at 48-48.5v
Brand new Ford complete parking brake assemblies
Any questions, please feel free to ask. I can send photos of anything you'd like to see. The vehicle is also
available for in-person inspection and test drives in Manassas, VA.