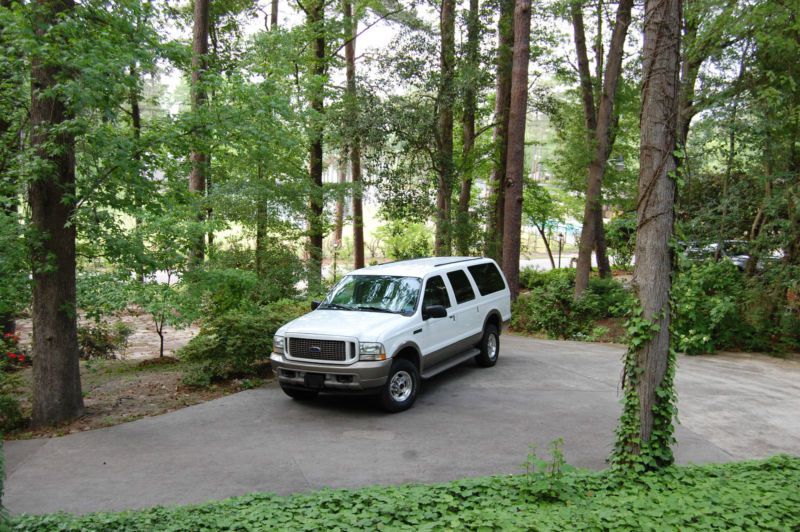 More infos regarding my car at: nanceynwwaitz@ukhotels.org .

I am the original owner in South Carolina and purchased this 2004 Ford Excursion Eddie Bauer 4X4 Diesel 6.0L Power
Stroke Torqshift™ 5-SPD Auto TR 7 passengers with Dual Bucket Seats in second row in June 2004. I have used it
not to tow but to be able to visit/carry members of my large family of 22. It is in great shape for a 12 year old
SUV. Near mint interior and exterior.
The SUV is loaded and literally has every option offered including 6-way Power and heated driver and passenger
seats with memory seat on driver's side, Power adjustable (forward and backward foot pedals, tilt steering wheel,
back-up sensors, climate control with front and rear dual zones, Factory entertainment system with DVD player with
2 wireless headsets and 6 disc CD changer. Trailer tow package. Keyless entry on door panel as well as two fobs.
44 gallon fuel tank.
I have the receipts for repairs/oil changes. Installed premium Michelin OWL s2 tires in January 2015 along with
front and rear shocks. Replaced batteries in 2015. In 2012 replaced EGR Cooler and oil cooler. In 2014 replaced
8 Injectors, Fuel pump and fuel pressure regulator. Husky rear cargo liner, Rain-x wipers and SLVRSTR ULT
headlights.