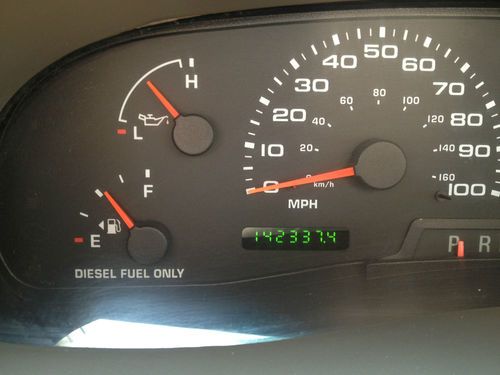 Condition: UsedA vehicle is considered used if it has been registered and issued a title. Used vehicles have had at least one previous owner. The condition of the exterior, interior and engine can vary depending on the vehicle's history. See the seller's listing for full details and description of any imperfections.Seller Notes:"small dent above left tail light may consider repairing for the right buyer driver side arm rest crack in leather easily fixable."

selling our 2003 ford excursion 7.3 diesel, very good condition other than general use. it has 142,000 miles and is still being used once a week or so, as it is not a daily driver just a sunday church rig or vacation rig. It has a kenwood navigation system with hands free calling and will control the rear entertainment system. It has a DP tuner six position chip for milage (it hauls my children not a drag racer). I have full service records from our ford garage available upon request. over the last two years it has had new font wheel bearings, ball joints,complete A/C system, injector driver control module, new transmission in june of 13 with a 3 year 36,000 mile warranty that has a certificate with vin number on it to go with it, new starter and alternator. once again i have all the service records for proof. The engine was replaced at 90,000 miles by Ford on warranty. it gets serviced every 3500 miles. has trailer brake controller . has front replacement bumper, designed for hitting deer without damaging vehicle. has gibson 4inch turbo back exhaust and a donaldson air cleaner. its a great running rig that i would drive around the world without hesitation but my wife wants something new so we are letting it go. its average milage is 16.3 will get around 21 or 22 at 75mph on the interstate, and will go 1,000 miles on a tank of fuel if you staying on the highway with no around town driving. it has rear airbag suspension that can be aired up under the license plate. has a edge evolution monitor (NOT A EDGE CHIP OR PROGRAMMER). I use it for mileage and exhaust gas temps during mountain driving. has two wireless headsets for the dvd player. third seat that can be removed. catch all floor liners front to back(700.00) for the whole set so these are good floor mats. im sure I am forgetting something so if you have questions please ask you can email me or call my cell at 4024693214 i will be happy to answer any questions you may have. Its a good rig that has never left us sitting and i hate to see it go but like i said the wife wants a new one. also this i have 6 powerstrokes that are used on our farm i have been around them all my life and they get the best care i can put forward, my old 97 f250 has 283,000 miles and never been touched, that was just a example of how i take care of stuff. thanks for looking and contact me any time !!!

THIS IS SOLD AS IS CONDITION WITH THE EXCEPTION OF THE WARRANTY ON THE TRANSMISSION WHICH IS TRANSFERABLE BUYER IS RESPONSIBLE FOR SHIPPING OR PICKING UP. THERE IS A AIRPORT 20MINS FROM HERE WITH DAILY FLIGHTS OUT OF DALLAS FORT WORTH AND I WILL COME PICK BUYER UP IF BUYER FLIES IN. I WILL HELP OUT AS BEST I CAN FOR THE RIGHT PERSON I AM ASKING 19,000 THERE IS A 500 NON REFUNDABLE DEPOSIT TO BE MADE WITHIN 24HRS OF AUCTION ENDING THE REST DUE AT PICKUP WITH CERTIFIED CHECK. ONCE AGAIN I WILL WORK WITH RIGHT PERSON/BUYER.
Andy