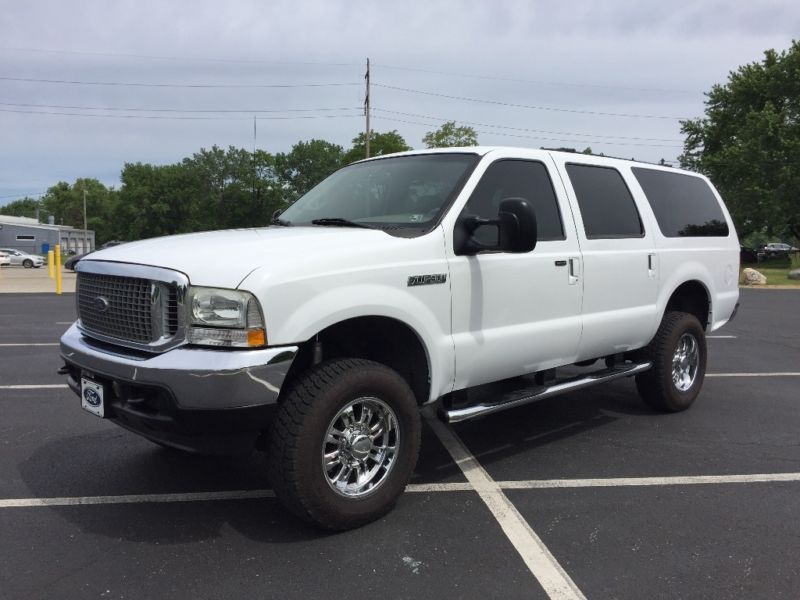 Feel free to ask me any questions about the car : lourdeswnorowski@netzero.net .

This 2002 Excursion has lived almost all of its life in sunny California. I have owned for the last 8 years and it
was used primarily for trips to our lake house in Havasu from CA. It was moved last summer to Erie PA and put in to
storage for the winter except for just 2 trips to a local ski resort 15 miles from our home. Otherwise it has never
seen snow or salt. Extremely clean under carriage as noted in the pictures. It is a Limited model however all the 2
tone colors have been eliminated to give the vehicle a nice clean look. New Katzkin leather was installed in 2012
and is still in perfect condition. New Nitto Terra Grappler All Terrain tires (275/70R18 10 ply) installed June
2015 for the drive out east and have less than 3000 miles on them since install. A Banks 6 Gun tuner with exhaust
was installed in 2010 and is set to medium power. This allows the truck to achieve 20.2 MPG fuel economy on the
freeway with excellent power. Kenwood sound system with Focal speakers, amp and subwoofer. Rear TV, center row
captains chairs, electronic brake control for towing. Running boards were taken from a 2010 Ford F-250 and match
the vehicle perfectly.