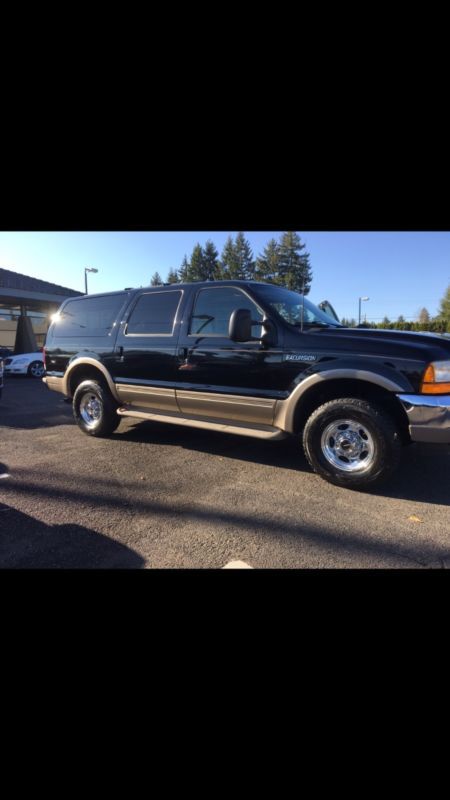 Very Rare 7.3 Powerstroke Diesel Limited Ford Excursion With Only 52,229 Original miles. This Ford excursion has to
be one of the nicest examples of a extremely hard to find 7.3 Powestroke available anywhere, it's a black exterior
with the tan Tutone , and has tan interior. I believe this excursion has every available factory option, has heated
seats, VCR player, 6 disc in dash CD player, power windows, door locks, air conditioning, rear air and heat, power
rear vent Windows, running boards , new Goodyear tires, and a trailer hitch. I purchased it from the original
owner, and have only put about 1,000 miles on it since I've owned it, I had it all serviced, oil changed, all the
fluids changed, and everything gone through on it, so it doesn't need anything. It was purchased at Skyline Ford in
Salem, Oregon, and it is still here in Salem. I had been looking for the nicest 7.3 excursion with the lowest miles
possible for years, I had a few new ones and ever since I sold the ones I owned before I had been looking and
looking. Then I found this one and it was exactly what I was looking for, the paint is in great shape, as is the
interior, it doesn't look like the third seat has ever been also, I figured I would keep it and drive it all the
time for road trips , etc to haul my family around, and it just sits and it doesn't get used, so I've decided to
sell it.. If your looking to find the needle in the haystack excursion this is it for sure.. Contact me if you have
questions, or anything else I can help you with, and it is available to be shown at anytime, thank you,