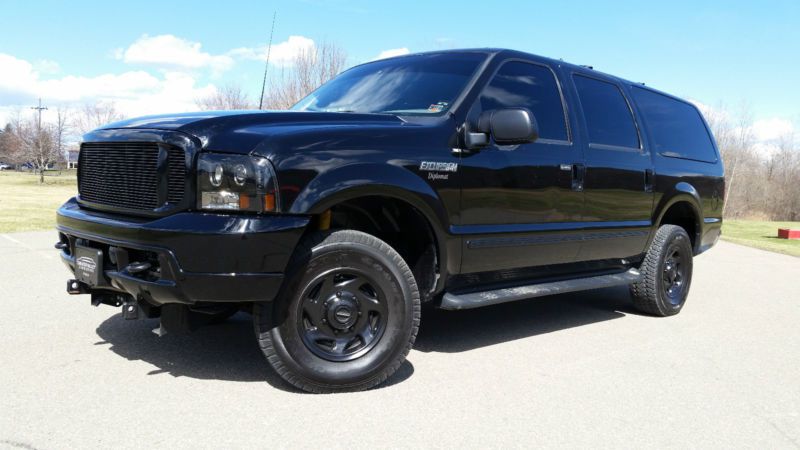 Just email me at: aishaattiemens@ukcool.com .

2000 Ford Excursion XLT
5.4L V8 Gas Engine
4X4
Limo Style Rear Interior w/ Bar
32,495 Original miles
This vehicle was originally purchased by the Federal Bureau of Investigation (FBI) New York City Field Office. It
was used for 2 years and put into a reserve fleet. Our limousine company purchased it from them and converted the
rear compartment into a 5 passenger limo. Conversion included adding a center lighted bar with separate Bluetooth
stereo system, divider, 2 rear facing bucket seats, and moving the rear seat back for leg room. We do still have
the 2nd row seat so this vehicle may very easily be put back to stock interior wise. Our company has used this
truck for dinner dates, wine tours, and diplomatic transportation. The truck was outfitted with mounts for a snow
plow this past fall but due to not having ANY snow this winter NEVER HAD A PLOW HOOKED TO IT!! Prior to sale plow
mounts will be removed as well as emergency lights on dash and license plate, and subwoofer.
THIS TRUCK RUNS AND DRIVES PERFECTLY WITH NO ISSUES!!!!!! Exterior has been modified with HID projector headlights,
blackout billet grille, black painted bumper, blackout wheel covers, and limo window tinting (professional.) Tires
are all brand new goodyear wranglers with silent armor tires in the rear. Dome lights and running board lights have
been upgraded to LED.
Pictures do this vehicle NO JUSTICE. this is the coolest looking and nicest driving Excursion you will find. This
SUV has spent most of its life sitting in a heated garage. We are selling this only because our stretch limos rent
more than this vehicle so we have decided to invest more into them. This has been more of a fun toy for our
company.