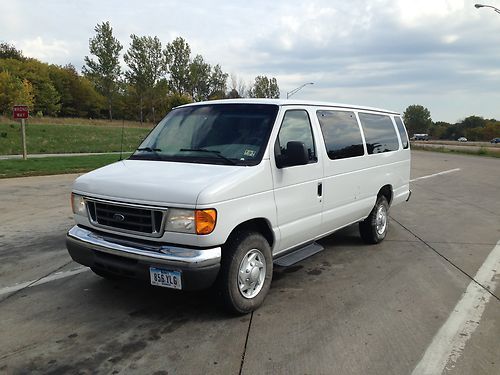 Condition: UsedA vehicle is considered used if it has been registered and issued a title. Used vehicles have had at least one previous owner. The condition of the exterior, interior and engine can vary depending on the vehicle's history. See the seller's listing for full details and description of any imperfections.Seller Notes:"Vehicle very clean was rear ended and got bumper bent but no actual damage is listed on car fax as minimal damage. White paint, grey cloth interior. Excellent condition was Texas truck until 18 months ago!. Great condition Just do not need vehicle so big! No rips or tears ,Great Day care or Church Van. Title in Hand"

63,400 miles 14 Passenger Van, This van is a very comfortable ride, Drives Nice. Each seat has arm rests, reclines great for long trips. Reading lights over head. Running boards Tinted glass. Only selling Van due to lack of need for such a large people Hauler. Just purchased from Texas 18 months ago had barely been driven since. Thats why we are selling it. Its in great shape does have minor damage on rear bumper due to being rear ended. Vehicle itself was never touched just slight damage to bumper . A VERY STURDY vehicle .Like driving a TANK for safety!. Can get more pics of interior upon request its being detailed in the next dew days. Clear Title in hand. Willing to ship if paid in full !Please call for more info.