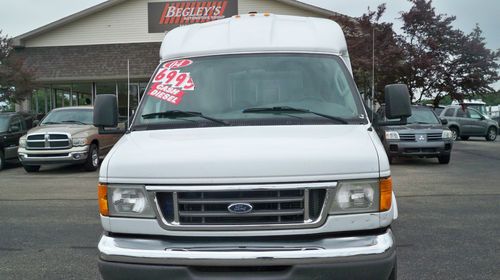 IM SELLING A 2004 FORD E350 COMMERCIAL VAN/BUS.IT WAS BOUGHT NEW BY BLUE CHIP CASINO AND WAS USED AS A SHUTTLE BUS.THE BUS RUNS GREAT.THE OUTSIDE OF THE BUS NEEDS SOME CLEANING AND THE SEEMS ARE COMING APART WILL NEED CAULKED OR GLUED BACK TOGETHER.THE INSIDE ALSO WILL NEED SOME ATTENTION.ALL THE WINDOWS WORK LOCKS WORK DRIVES SMOOTH AND STRAIGHT. WITH A LITTLE TLC YOU WILL HAVE A GREAT BUS..CALL 574 322 9025 I POSTED THE BEST PICS I COULD SO YOU HAVE A GOOD FEELING ON WHAT YOUR BIDDING ON