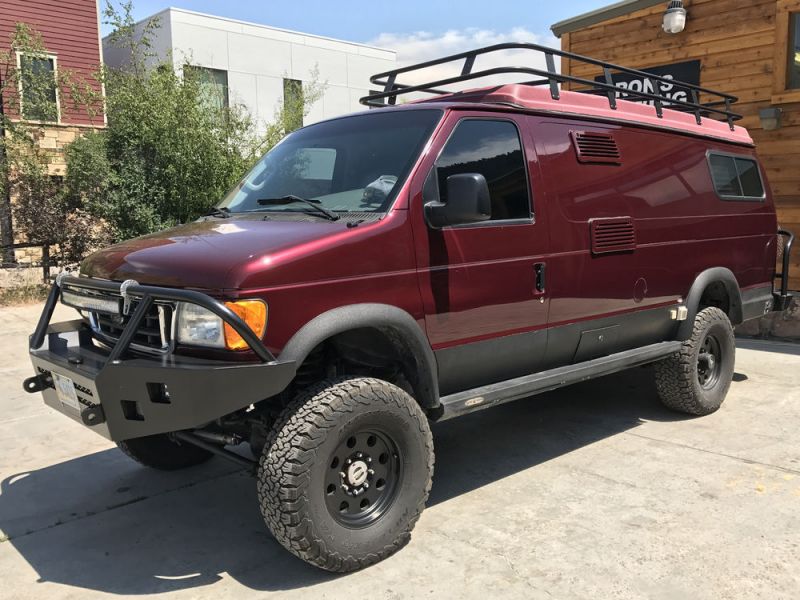 Please email me with any questions or requests for additional pics or something specific at: christelcccologie@clubkawasaki.com .

This was built new in 2006 as a 2WD Sportsmobile in Fresno.
She was converted to 4X4 3 years ago by an off road shop in Idaho Falls called CDI. It has a 2005 Ford F350
straight axle 4X4 conversion. It was a used front end. I have completely rebuilt the front end in the last year, It
is stout! I also have removed the rear couches and made it into a queen size bed. This van is made for 2 people.
Here are some of the Engine and other upgrades done,
Aluminess Front Bumper with square light holes and Ridged Lights spot and flood.
Aluminess Rear bumper with Swing out tire rack and Baja storage box
Both bumpers have winch boxes
Aluminess Top rack
Aluminess side ladder
Electric Step Bars
Rock sliders
ARB front lockers
Rear air bags
Front swivel seats
Bully Dog Programmable chip
All battery's are new 2 van 2 house
Amazing Stereo system.
10 Gallon water tank W/electric pump
Stove Propane
Propane heater plumbed into propane line.
Propane sensor just replaced.
New Microwave
Fan
Fox Shocks are new and custom built for "this" van by Agile Offroad
Tires have 5000 miles on them.
At 30.000 miles prior to any issues. Which is the key to fixing the 6.0 issues. The EGR delete was done and a
larger turbo us installed.
The head bolts were not changed since there were no issues.
Run's perfect, in 40.000 miles I have never had any engine problems.