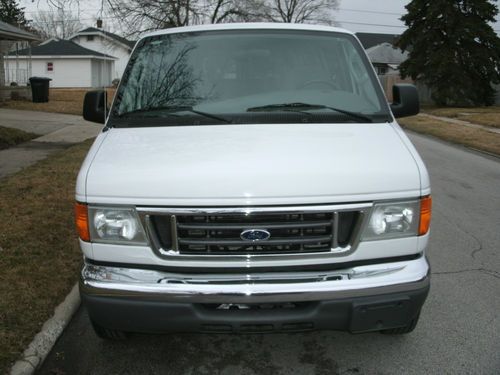 Condition: Used: A vehicle is considered used if it has been registered and issued a title. Used vehicles have had at least one previous owner. The condition of the exterior, interior and engine can vary depending on the vehicle's history. See the seller's listing for full details and description of any imperfections. ...
2005 Ford E350 Econoline Van
XLT SD Wagon, 12 Passenger
Only 21782 Miles

No dents, dings, scratches, or rust. Completely clean.
Owners are non-smokers and are the original owners.
Like new condition.

With the super low mileage it is like getting a almost new van at a fraction of the cost. Insurance for this should be lower than for a new van since it is slightly older.

Just put new tires on it a week ago.

We will not ship the van, the winner will need to pick it up or arrange pickup on their own.
The van is in Lafayette, Indiana.
Payment will be through $1,000.00 deposit through PayPal within 48 hours of end of auction and certified check for the balance..
Payment in full before van is picked up.
Upon completion of the auction, we will notify the winner of our address/phone number.