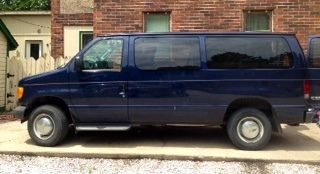 FOR SALE IS A 2005 FORD E350 SUPER DUTY PASSENGER VAN  IT HAS A 12 PASSENGER CAPACITY.  IT IS IN GOOD SHAPE THERE IS A SMALL DOOR DENT ON THE RIGHT SIDE WHERE A DEER COLLIDED WITH IT BUT IT IS PRETTY SMALL.  IT HAS GOOD TIRE AND A RECENT ALIGNMENT.  IT IS MECHANIC OWNED ALL REPAIRS WERE DONE PROMPTLY AND CORRECTLY.  ALL PREVENTIVE MAINTENANCE WAS DONE IN A TIMELY MATTER.  IT WAS PREVIOUSLY OWNED BY A SMALL SCHOOL DISTRICT AND WAS DEALER SERVICED REGULARLY.